Here is a compilation of WASH related news, views and articles worth reading in September 2017.

Historically, Ethiopia’s economic prosperity has been heavily driven by rainfall and water availability. Recent periods of GDP growth and poverty reduction also coincided with periods of more reliable rainfall and greater public investment. In contrast, previous periods of drought have severely constrained economic growth and exacerbated food insecurity. Given the country’s historically highly variable rainfall patterns, the unreliability of rainfall has played a significant role in Ethiopia’s development — and the health and growth of its children. As of 2014, 40.4 percent of children under age five suffered from stunting.  Increased water scarcity decreases crop yields, which causes food insecurity and nutritional shortcomings in the crucial early years of children …read more 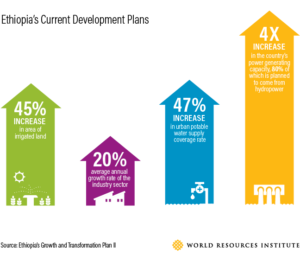 Gender and sex inequalities in water, sanitation and hygiene

By Libbet Loughnan and Craig Kullmann on The Water Blog

Addressing gender and sex inequalities in WASH is not only recognized in Sustainable Development Goals (SDGs) 4 and 6, it is central to the entire ambition of the SDGs themselves. Some water, sanitation, and hygiene issues are faced only by women because of their biological sex, whereas others are more influenced by gendered societal norms. To truly leave no one behind, we need to be mindful of and work against gender and sex inequalities in all development work …read more

Experts predict fastest-spreading cholera epidemic since records began will affect at least 1 million people by turn of year, including at least 600,000 children.

The cholera epidemic in Yemen has become the largest and fastest-spreading outbreak of the disease in modern history, with a million cases expected by the end of the year and at least 600,000 children likely to be affected. 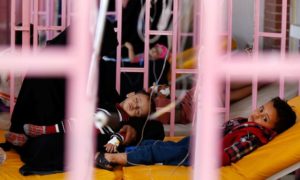 A mother sits with her sons while they are treated at a cholera centre in Sana’a, the capital of Yemen. The country’s cholera epidemic could reach 1 million cases by the end of the year. Photo Credit: Khaled Abdullah/Reuters

The United Nations Children’s Fund (UNICEF) says that handwashing practice can reduce the risk of contracting diarrhea and other communicable diseases by 40 per cent.

The UNICEF’s Country Representative, Mr Mohamed Fall, made the assertion in Akure on Friday, October 27, 2017 when he paid a courtesy visit to Gov. Oluwarotimi Akeredolu of Ondo State.

Fall stressed the importance of promoting sanitation and handwashing in complementing the achievements of the state government in the areas of healthcare and quality education.

He pointed out that partnership between UNICEF and the state government will go a long way to improve sanitation in the state.

Fall noted that access to quality education and good healthcare is crucial to human capital development.

Driving home the position of Nigeria in African Affairs, the country representative said: “If Nigeria does not make Sustainable Development Goals, Africa will not make it, especially the sub-Saharan Africa.” …read more

The preparations for the 2017 HLMs underscored the importance of understanding the magnitude for the challenge to achieve the SDGs. Most countries have identified their investment needs and funding gap for the SDGs and many are planning to develop or strengthen strategies to close the funding gap and sustainably finance the sector. This webinar elaborated the various options for financing the SDGs and showcased the strategies and efforts of governments and development partners working together to build sustainable financing strategies …read more

By Peter Duru on Vanguard Nigeria

The United Nations Children’s Fund, UNICEF, in collaboration with the Benue state government have trained and taught over 10,000 Benue school pupils and children the importance and rudiments of hand washing.

This was made known by the Hygiene Education Officer of the Benue State Rural Water Supply and Sanitation Agency, BERWASA, and Coordinator of 2017 edition of the Global Hand Washing Day Celebration themed “Our Hands Our Future”, Mr. John Egiri at the end of the celebration held at the LGEA Primary School Otukpa, Ogbadibo local government Area.

Egiri stated that the celebration which was held in schools in eight local government areas of the state including Tarka, Guma, Konshisha, Buruku, Obi, Oju, Katsina/Ala and Ogbadibo turned out a huge success. He said, “We had targeted 2,000 children and pupils but we were able to reach over 10,000 children including the uninvited ones during the week long sensitization on hygiene and healthy living …read more

Empowering Girls: A Discussion on Menstrual Huts and Hygiene

Despite being illegal, menstrual huts in Nepal remain an unsanitary and inhumane problem that claim the safety and life of women and young girls. Banished from their homes for up to five days without adequate food or safely managed sanitation, women are seen as impure and polluting in western Nepal.

On the International Day of the Girl Child (11 October), let us reflect on one of the most important processes all girls experience, the menstrual cycle. While in the UK, having your period can be seen as a sign of womanhood and at times even an inconvenience, menstruation in many parts of South Asia is considered dangerously dirty and powerfully polluting. Throughout western and rural Nepal, when girls get their period, they are shunned from society …read more 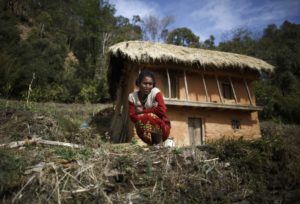 War on cholera can’t be won without water and sanitation

WaterAid has warned that global efforts to end cholera will fail unless the world’s poorest are given the tools they need to fight the disease – clean water, decent sanitation and good hygiene.

A new report by WaterAid, ‘The war to end cholera’ reveals the countries with the highest cholera burden are also the same nations with the greatest number of people living without clean water and decent sanitation.

The report has been released ahead of the launch of a new global roadmap to end cholera within a generation. The new roadmap – organised by the Global Task Force for Cholera Control (GTFCC) – aims to reduce cholera deaths by 90% by 2030 and eliminate the disease as a threat to public health in up to 20 countries by 2030. …read more

Water and Religion: The Way Forward for Strengthening their Connection

Water and religion share an intricate relationship. The nature of their connection and its relevance for society in India has been exemplified in the story dated 16 August 2017. However, in contemporary times, this intricate relationship is being seriously challenged, ultimately disrupting the ‘water-religion-society continuum’ in multiple ways. These challenges and their implications for society and environment in India have been presented in the story dated 16 September 2017. In this context, there is undoubtedly an urgent need to strengthen the connections between water and religion so that not only are water-related religious beliefs and practices supported and perpetuated, but more importantly, water sustainability in general is promoted, in turn enabling sustainable development. This photo story aims to delineate a way forward whereby the connections between water and religion can be strengthened, primarily drawing upon the context of Hinduism. This entails a multi-pronged approach and requires concerted efforts on part of all water stakeholders. …read more 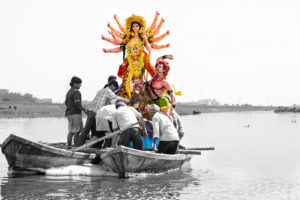 Handwashing with Soap, Where Are We?

Global Handwashing Day (October 15) was established in 2008 as a platform to advocate for greater attention to hand hygiene. This effort, combined with many other efforts to bring attention to the need for improved water supply, sanitation, and hygiene, have resulted in the inclusion of handwashing as an indicator within the Sustainable Development Goals (6.2.1 Population with a basic handwashing facility with soap and water available on premise). With this, more countries than ever before have begun to include handwashing with soap as an indicator in their routine data collection. Two recent publications, the Joint Monitoring Programme’s (JMP) Progress on Drinking Water, Sanitation and Hygiene and the Handwashing in 51 Countries study provide us with the big picture of where we stand on handwashing with soap across regions and within countries. …read more