Here is a compilation of WASH related news, views and articles worth reading in May 2018.

The problem is partially rooted in institutions, who having imperceptibly supplanted traditional & cultural rites of passage often fail to recognize the extent of the need for robust, wholistic and sustained alternatives. Girls experiencing menarche not only require WASH infrastructure, but meaning; they not only need materials, space and privacy to change and dispose of menstrual products, but an environment free from aspersions, …read more 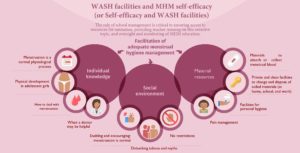 Download the full infographic to learn about WASH-based MHM interventions in schools.

Most power generation consumes water, whether to cool steam in thermoelectric plants or power turbines for hydropower. And the global demand for both water and electricity will continue to increase substantially in the coming decades. Although growth is generally a good thing for the economy, it challenges nations—particularly ones that are water-stressed—to better manage their limited water resources and invest in the right energy systems.

Power generation from solar photovoltaic (PV) and wind is clean and requires zero or little water use. These renewable forms of energy can help countries meet their increased demand for electricity without adding carbon emissions or consuming water. This could be particularly beneficial in countries where growing populations, farms and industries are already competing for scant water supplies. For example, a recent WRI analysis shows that India could reduce its water consumption intensity by more than 25 percent just by achieving its renewable …read more

by temitope On Hope Spring Water 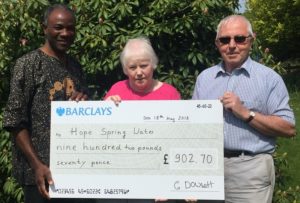 The community fundraising coffee morning, organised by Peter and Chris Dowsett of Little Birch, met and exceeded the target amount it was expected to raise for Hope Spring Water charity. The coffee morning took place on the 12th of May, at Much Birch community hall. Though it lasted for just three hours, it saw a good turnout of supporters from the local community, and from as far afield as Ross-on-Wye and Oxfordshire, as soon as the door opened at 10am.
Peter and Chris are well known for their fundraising activities, in their local community and through Herefordshire. For more than ten years, they have organised fundraising coffee mornings every year. Previous good causes that have benefited from their fundraising expertise and generosity included MacMillan cancer care and the RDA (riding for the disabled).
For the event, one section of Much Birch community hall was transformed into a cafe, serving free tea and coffee, and for a donation of a £1 or more, you could have a slice of cake with your tea or coffee. The other section of the hall was turned into assorted stalls, selling cakes, potted plants, books, bric-a-brac and a tombola stall. A table selling raffle tickets was strategically placed at the entrance to the hall. …read more about this fundraiser and a new walk for water fundraising challenge starting in July 2018.

‘The river is dead’: is a mine polluting the water of Brazil’s Xikrin tribe?

The Xikrin, who have lived alongside the Cateté river in the Amazon rainforest in northern Brazil for centuries, have a mantra: “The river is our life.” Surrounded by an abundance of plant species, they swim and bathe here.

To fish, the tribe use timbó, a toxic vine that reduces the concentration of oxygen in the water, forcing the fish to come to the surface, where they are shot with arrows. “If we use hooks to fish, only one of our families will eat fish,” explains former tribal chief Onkray Xikrin. “But with timbó the whole village can eat.”

But the River Cateté is dying, and with it the way of life of the Xikrin. In 2010 Mineração Onça Puma, a company owned by the mining company Vale, began extracting …read more

Mujuni Kitimbo Jimmy (Field Officer, Ministry of Health, Uganda) talks about successes using ‘Institutional Triggering – an Advocacy Tool’ with Community Leaders resulting in improved sanitation for communities in Uganda. This interview was filmed at the East and Southern Africa Regional Sharing and Learning Workshop on CLTS and Rural Sanitation 16 – 20 April 2018, Arusha, Tanzania. The event was organised by the CLTS Knowledge Hub with support from SNV Tanzania. It was funded by the Swedish International Development Cooperation Agency (Sida).

India’s Silicon Valley is bracing for another thirsty summer.

Faucets are running dry and the lakes that once nurtured the southern city of Bangalore and its nearly 10 million residents are either parched or fetid with toxic effluents.

Much like Cape Town in South Africa, Bangalore’s water woes have been in the making for some time with years of unplanned urbanization, rapid population growth and poor management of water resources. 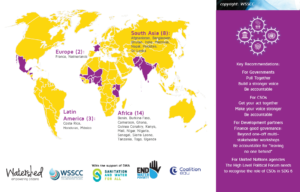 A group of CSOs in 27 countries under the umbrella of SWA partners End Water Poverty, Watershed, Coalition Eau and WSSCC just published the draft preliminary findings of their study Global Review on National Accountability Mechanisms for Goal 6.

The study investigated the nature of the existing national accountability mechanisms as well as the challenges and the opportunities.

Nearly half a million children die each year from diarrhoeal illness, more than half of them directly related to dirty water, poor sanitation and poor hygiene. Those who survive multiple bouts of diarrhoea are left weakened and sometimes stunted, their long-term development and education compromised. But major health gains are possible if decision-makers coordinate, integrate and invest in child health and water, sanitation and hygiene measures.

Produced by WaterAid and PATH’s Defeat Diarrheal Disease (Defeat DD) Initiative, this new analysis is published in the report Coordinate, Integrate, Invest: how joint child health and water, sanitation and hygiene (WASH) interventions can deliver for your country’s future.

Modelling has found that rotavirus vaccination — used to …read more

Menstrual Hygiene Day 2018: How USAID Is Working Toward Female Empowerment Through Sanitation and Hygiene Activities

By Claire Hubert On globalwaters.org

Girls take menstrual hygiene management into their own hands as they make reusable menstrual pads as part of an after-school program in Uganda. Photo credit: USAID/WASHplus

This year’s Menstrual Hygiene Day celebration is all about women’s empowerment. In many countries, women and girls’ participation in education and public life is severely curtailed when they have their periods. Empowering women and girls is a key goal of USAID’s efforts to improve water, sanitation, and hygiene (WASH) conditions in communities around the world. Providing girl-friendly washrooms and menstrual hygiene education and supplies are some of the ways USAID’s WASH assistance helps reduce the stigma associated with menstruation and ensure that women and girls experience #NoMoreLimits related to their periods.

USAID recognizes menstrual hygiene as a vital part of the health and dignity of women and girls. Working in nine countries across …read more

In November 2017, I was invited to a meeting organised by KEWASNET, a coalition which is a member of End Water Poverty, to discuss Kenya’s WASH CSO advocacy strategy based on the 2016 Kenya Water Act. 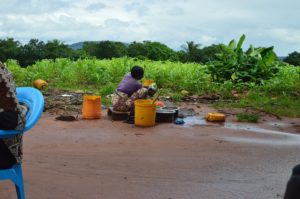 Kenyan CSOs were excited about this news; at the same time they were cautious about some aspects of it. This is the situation with most laws written through consultative processes when many interest groups lobby for their constituents.

Wanting to learn more, I decided to read about Kenya’s new law. Upon going through it, I also got excited and cautions at the same time. Here is the  …read more

On The World Bank

The World Bank approved today an International Development Association (IDA)* financing of $220 million to support the government of Benin in its efforts to provide universal access to water for rural communities.

The new AQUA-VIE, Rural Water Supply Universal Access Program-for-Results(PforR) will help increase access to water supply services through the construction of 270 new piped rural water supply systems, and the rehabilitation and expansion of about 360 existing systems. About 1.6 million people living in rural areas will benefit from the Program through the construction of 34,500 new household connections and 3,300 new standpipes. Moreover, water service delivery arrangements will be strengthened through the establishment of performance-based contracts with regional operators and through capacity building activities for water supply …read more

By temitope On Hope Spring Water 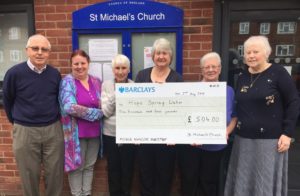 The St Michael’s C of E Church in Dines Green area of Worcester, in Worcestershire has raised over £500, for a Hope Spring Water project. The Church organises a Lent lunch Fundraiser every year. At the beginning of this year’s Lent lunch fundraising, the organising committee decided that money raised, will be used to fund a clean water project. They Lent lunch organisers were particular about supporting a local small charity, Hope Spring was the small water charity the choose.

By Ishaq Zaki On Environews Nigeria

Yari disclosed this on Tuesday, May 29, 2018 while speaking at the 2018 Democracy Day Celebration held at Zamfara Trade Fair Complex, Gusau.

He said since water was considered as a necessity of life, his administration had since inception in 2011, came up with a special water policy to address the problems of water scarcity in the state.

“We copied an underground water system from the Millennium Development Goals (MDGs) water project executed in the state and selected 30 towns and villages across the 14 local government areas of the state that benefited from project,” he said.

According to him, other sectors that the state government gave emphasis to within his seven years of stewardship are in the area of education, health, agriculture and road.

He said as education remains bedrock for future development of every society, his government have invested extensively in the sector.