Here is a compilation of WASH related news, views and articles worth reading in June 2017.

Boat toilets help tackle environmental challenges in Kenya  on UN water. Most of the rural population still do not have latrines within their homes, which means that open defecation is common. In addition, many fishermen are working at night and far from the shore and toilets. To address these human waste challenges, a local grassroots organization has introduced the arborloo and the portable boat toilet.

Mbita, on the Kenyan side of Lake Victoria was once a vibrant fishing village, but it has lost its shine in recent years as a result of deforestation, habitat degradation due to sand mining, overfishing, and poor waste management. Photo Credit: James P. Pierce – SEEK

Improving global governance of water and sanitation  on UNwater. UN Member States discuss efforts to improve the integration and coordination of the UN’s water-related work.

In March and May 2017, UN Member States gathered to discuss how to improve global governance of water and sanitation in the UN. The two dialogues were mandated by UN General Assembly resolution 71/222 of 21 December 2016, titled ‘International Decade for Action: Water for Sustainable Development 2018-2028.’ Katalin Bogyay, Permanent Representative of Hungary, and Lukmon Isomatov, Ministry of Foreign Affairs, Tajikistan, served as co-moderators.

Changing the way the world views and manages water: Storytelling through photos by Water Communications. The Joint Secretariat of High Level Panel on Water and Connect4Climate announced today that the winner of the Instagram Photo Competition — #All4TheGreen Photo4Climate Contest Special Blue Prize — for the best photo on water is Probal Rashid, from Bangladesh, with a photo taken in his country showing how water stress is affecting individuals in his community. 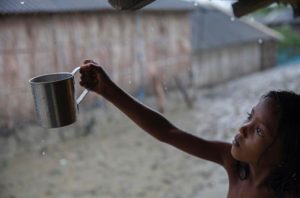 Global Coalition Calls for Withdrawal Of SDGS Progress Report  on End Water Poverty. A report on the Sustainable Development Goals (SDGs) fails to capture the the true picture of water challenges and the UN must withdraw it, said a global civil society coalition.

The civil society coalition End Water Poverty (EWP) criticised the Secretary-General’s report on progress towards the globally agreed SDGs, stating that it lacks understanding and analysis of goal 6, which aims to ensure the availability and sustainable management of water and sanitation for all.

Five priorities to ensure water and sanitation for all  on World bank.

WASH Tech day on German Wash – Network News. On June 24, 2017, the 2. Humanitarian WASH Tech Day took place at the premises of the training institute of the Federal Agency for Technical Relief (THW) in Neuhausen, Germany. The event was conducted in close collaboration with the Department for Humanitarian Assistance of the German Federal Foreign Office and THW.

Singing about toilets in the Solomons  on Wateraid. Traditional singing and tribal dancing celebrations have held for a new and unusual reason in the Northern Malaita Province.

The Solomon Islands is world renowned for its melodic singing and unique tribal dancing styles. Traditionally these activities are reserved for special events and celebrations, however following recent achievements in Northern Malaita Province, communities are celebrating something new. 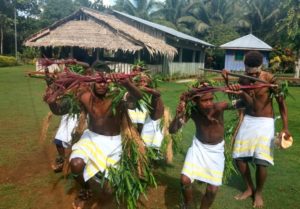 Syria: Safe drinking water at last, after four years.  By Safi Sahli, Medair relief worker. Imagine how difficult your life would be if, for the next four years, you had very limited access to safe and clean water. If you lived in rural Homs, you wouldn’t need to imagine it. That’s what they have been dealing with since 2013. “We have not received a drop of water through the water network since 2013,” said a teacher in Al-Aliyat, a small village south of Homs. “Our only choice is to buy from the trucks that carry water from unknown sources.” In March 2017, I was part of a Medair team from Damascus on a field visit to southern and western Homs. We wanted to learn more about their enormous water needs and see how we could help.

Kenya is promising free sanitary napkins to help keep girls in school  on USaidwaterckm. Kenya’s president has promised to give all school girls free sanitary napkins. Less than two months before Kenyans go to the polls, president Uhuru Kenyatta signed the Basic Education Amendment Act which compels the government to provide “free, sufficient and quality sanitary towels to every girl child registered and enrolled in a public basic education institution. 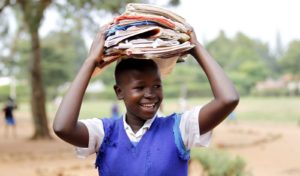 Global status report on water safety plans by World Health Organization; International Water Association. In Ethiopia, an extensive water quality study revealed that only 72% of 1602 samples collected from improved sources complied with microbiological water quality standards, with only 43% of protected springs in compliance as compared with 88% of piped supplies (WHO & UNICEF, 2010). These findings demonstrate the critical distinction between improved and safe water supplies and highlight a clear role for WSPs to address this gap. The Government of Ethiopia has responded to these and additional concerns related to climate-related impacts on water systems by launching a climate-resilient (CR) WSP programme. A national framework on CR WSPs has been formally adopted, as have customized national guidance documents CR WSPs for urban and rural systems. Twelve WSPs had been implemented as of the end of 2016, with continued scale-up planned.

Why Africa’s Biggest Economy is Falling Behind on Sanitation and 7 Ways Donors Can Make a Difference on Wash funders. Nigeria, Africa’s biggest economy, has a staggering 130 million people without access to adequate sanitation according to WaterAid Nigeria. 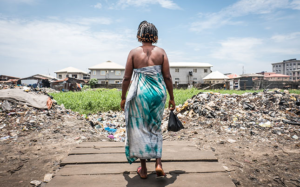 Modinotu Sofola, 37, has been practising ‘short put’ or ‘flying toilet’ since she moved into this informal settlement within Lagos 19 years ago. Photo: Water Aid/Tom Saater

The country is witnessing rapid population growth such that urgent planning is needed to effectively pursue meeting the sanitation target of the Sustainable Development Goals. In 2013, United Nations projected that the country by 2050 will be the third most populous globally after India and China at an estimated growth rate of 2.8 percent.

Somalia: “We had to beg for water” by Action Contre La Faim. Nearly 615,000 people, mostly women and children, have left everything to escape the drought that has plagued Somalia for several months. Hawo Abdi, 29, a widow and mother of five, fled her village of Alafuto in the Lower Shabelle region to join Mogadishu. In the hope of finding help, food and water. She now lives in a camp for displaced people in the Kaxda district.

When she begins her long march to Mogadishu, Hawo does not know when her next meal will take place or when she will be able to drink drinking water. Along the road, water sources are mostly contaminated, making people vulnerable to infectious diseases.

Rural Drinking Water Challenges by Nandita Singh and Om Prakash Singh. India has a large rural population of over 900 million living in more than 176 million households distributed across 1.7 million rural habitations. According to the Census of 2011, the proportion of these households enjoying access to drinking water source within premises is only 35%. The rest have to procure drinking water from outside sources, with over 22% using sources over 500 meters away. This figure illustrates the extent of challenge in accessing drinking water in rural India. The challenge is further deepened by factors such as increase in population, defunct drinking water supply systems, poorly maintained hand pumps and tubewells, and lowering of the ground water table, etc. 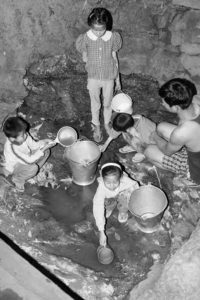 Innovation at Work: Plastic Latrine Slabs Address Ghana’s Sanitation Challenges  on Global Communities. Global Communities, through the USAID-funded WASH for Health Project, is providing plastic latrines to people with disabilities. Anani, who has difficulty walking and uses a cane for support, explains that the challenge of not having a household latrine is particularly difficult in the evening and when the rains come because he and his family had no choice but to defecate in polythene bags at home and dispose of them in their refuse container because the pit latrine is very far from their house. Anani added that though there are local artisans who could help him construct a latrine, he could not afford to pay them. He was also deterred by the daily maintenance required to keep a latrine hygienic and clean, knowing his own neighbors seemed to have difficulty with the upkeep: “There are [a] few household latrines around, but considering the bad odor and the number of flies that hover around them, that did not encourage me either,” he says.