Here is a compilation of WASH related news, views and articles worth reading in July 2017.

Progress on drinking water, sanitation and hygiene 2017 On World Health Organization (WHO) and the United Nations Children’s Fund (UNICEF)

The JMP 2017 update report presents indicators and baseline estimates for the drinking water, sanitation and hygiene targets within the Sustainable Development Goals (SDGs). The report introduces the indicators of safely managed drinking water and sanitation services, which go beyond use of improved facilities, to include consideration of the quality of services provided. For the first time, hygiene estimates are reported for 70 countries. 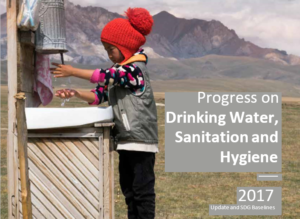 How to test water quality? Chemical tests for limited budgets On The Water Blog by Jessica Anne Lawson

Thanks to modern chemistry, we can detect thousands of chemicals in water, even at extremely low concentrations.  The ever-growing list of tests that are available can feel overwhelming, and the vast majority of methods require state-of-the art lab facilities. Fortunately, we don’t need to test for everything! A much smaller and more practical set of tests can provide a good sense of chemical water quality for monitoring purposes.  The good news is that there are low-tech versions of these tests for situations when budgets are limited.

We are making progress daily with our vision of giving hope to the hopeless and underprivileged including people with disabilities through our new partnership with Procter & Gamble – Nigeria to reach girls in need of sanitary aid through #APadAGirl2025 campaign Project. The campaign is aimed at encouraging and sensitizing girls between 11 and 16 years of age as well as young women between 18-24 years of age on the importance of using Sanitary pads as against other unhealthy options like old clothes and tissue, thereby promoting menstrual hygiene.

Before each Global Handwashing Day, the Global Handwashing Partnership selects a theme that will inspire celebrants and encourage handwashing with soap beyond October 15. This year’s theme is ‘Our Hands, Our Future’, reminding us that handwashing protects our own health, but also allows us to build our own futures, as well as those of our communities, and the world.

The impact of a toilet: A family story  On DefeatDD Published

When the floods came and privacy and safety were harder to find, the Kumar family decided to take out a loan and build a toilet instead of using nearby fields. The impact has been greater than they could have imagined.
This is the third video in a series about efforts to combat diarrheal disease in India.

WHO: 5,000 suspected cholera cases recorded each day in Yemen On Aljazeera

Every day 5,000 new suspected cases of cholera are registered in Yemen, the world’s largest outbreak of the disease, according to the World Heath Organization.

Fadela Chaib, WHO spokeswoman, said at a news conference in the Swiss capital of Geneva on Friday that the situation was “far from being controlled”.

“The rainy season has just started and may increase the paths of transmission,” she said. “Sustained efforts are required to stop the spread of this disease.”

The WHO reported 368,207 suspected cases and 1,828 deaths in the Arabian Peninsula country since late April.

A carefully managed paitan helps conserve each and every drop of rain received during the monsoons, in turn recharging all the kuiyan every year. Social rules have been defined by the community regarding maintenance of cleanliness in the paitan and general management of the community’s water wealth. These rules are strictly followed, and defaulters may have to pay heavy fines. A recharged kuin is able to supply drinking water to the village households almost throughout the year. 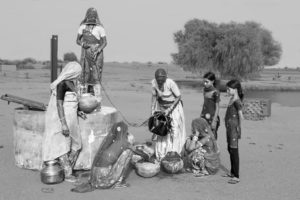 Pitchers being filled with water drawn from a kuin (Photo by: Om Prakash Singh)

The depth of the kuiyan varies between about 6 and 13 meters. Its base is about 2 meters in diameter while the top is narrower. Water is available at a depth of 1-1.5 meters immediately after monsoon and gradually lowers down.

Leave No One Behind? Over Two Billion People Lack Access to Safely Managed Water On End Water Poverty

End Water Poverty (EWP) – a global civil society coalition that is working towards ending the water and sanitation crisis –  is one of many organisations, which appreciates the work of the JMP. According to EWP, in future when more data is collected, the global coverage figure of those who have access to safely managed water and sanitation will decrease. However, it is crucial to note that this potential decrease will be more representative of the world we live in today as opposed to extrapolated data. With the need to improve on data gathering and reporting methods, EWP makes the following recommendations:

Sanitation and gender – looking beyond the binary On WaterAid by Andrés Hueso, Mamata Dash and Priya Nath

Research has shown that the issue of transgender and intersex access to sanitation is under-addressed in the water, sanitation and hygiene development sector. Andrés Hueso and Priya Nath of WaterAid UK and Mamata Dash of WaterAid India, discuss the human rights issues at the heart of the matter, and what could be done

Next time you are in a public place – a restaurant, a festival, an institutional building, a school or even your workplace – have a look at the toilets. Usually, what you will see is two sections: one for males, and one for females.

Challenges before Nigerians in accessing water, toilets by 2030 – Report On EnviroNews Nigeria

Recently released figures reveal the scale of the challenge ahead to bring universal access to water and sanitation in Nigeria by 2030, international development organisation, WaterAid, has said 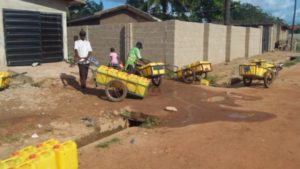 WaterAid’s analysis of figures released in the new ‘Progress on drinking water, sanitation and hygiene: 2017 update and SDG baselines’ by the Joint Monitoring Programme – a body set up by Unicef and the World Health Organisation (WHO) to collate data on water and sanitation coverage – shows that Nigeria will only be able to deliver a community source of clean water within a 30-minute round trip to everyone by 2039.

On 7 June 2017, World Health Organization (WHO) was notified of a cholera outbreak in Kwara State, Nigeria, where the event currently remains localized. The first cases of acute watery diarrhoea were reported during the last week of April 2017 and a sharp increase in the number of cases and deaths has been observed since 1 May 2017. However, the number of new cases reported has shown a decline over the last four reporting weeks.