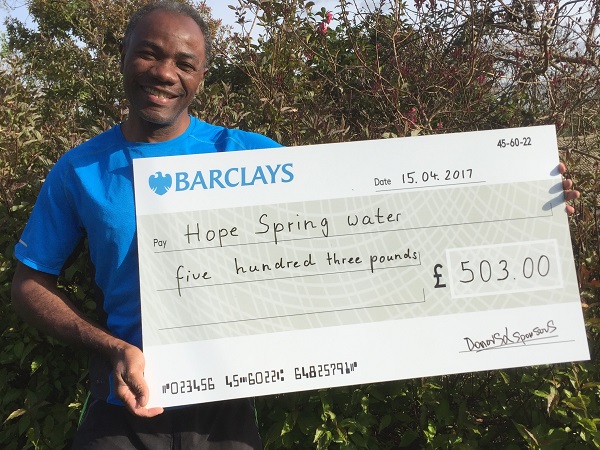 The early winter morning runs, aching limbs and blisters could not stop Temi Odurinde from running the Barcelona Marathon on the 12th of March, in aid of Hope Spring, a Herefordshire based WASH (water, sanitation and hygiene) charity.
Temi Odurinde, 56, of Kingsthorne, Herefordshire ran the 26.2-mile race in early April, after just over three months of training. When thinking of an endurance race to run as a fundraiser for Hope Spring, Temi thought of the London Marathon. He was not successful at the ballot to get a place in the London Marathon, so he turned his attention to the Barcelona marathon. He said securing a place to run the Barcelona marathon is straightforward, compared to securing a place in the London or Berlin marathons.
Temi, who is not completely new to long distance running, completed the 26-mile race in 4 hours 40 minutes. He said, “It was not my best race, I had not prepared properly, so after the halfway mark I was basically exhausted so I slowed down significantly”. He had his marathon personal best at Paris marathon in 2012 when he completely the race in 3 hours 54 minutes.
Raising money for Hope Spring Water
Temi, who regularly runs with the Hereford Runners and the Wye Valley Runners running clubs, raised £503.00 for the Hope Spring Water charity. He said he could not have raised the funds without the support of people from his two running clubs, his family and friends. “When Gift Aid is added to the total funds I raised, Hope Spring could easily build two wells in Africa with that”. “The wells will provide clean drinking water for at least five hundred people”, he added.