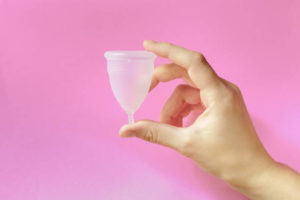 A menstrual cup is a type of reusable feminine hygiene product. It’s a small, flexible funnel-shaped cup
made of rubber or silicone inserted into the vaginal during menstruation. It is basically used to collect
menstrual blood from the virginal during menstruation.However regardless of the high efficiency of
Menstrual Cup, research has shown that it is not popularly used among women and adolescent girls.
Indeed in some parts of Africa some women are oblivious of the topic.

According to research.it has been established that the reason why most women do not subscribe to the
use of menstrual cups is mainly because they feel it’s a difficult process for them. That is, they do not
feel comfortable using it as a result of the excruciating pain they experience when fixing and removing it,
and the fear of leaking and chafing.

However Menstrual cup is effective and efficient for those who has been familiar to its usage. This is
because its advantages are far more than its disadvantages.Menstrual cup collects menstrual fluid rather
than absorbing like sanitary pads and tampons, Also it is reusable.According to research some women
attested to the use of a menstrual cup for over ten years and it has been efficient for them. Once the cup
is full,they dispose the blood,wash and reuse.

Menstrual cups is cost effective and more economical than disposable products, It has a lasting duration
reason being that a cup can be used for several years.Once it is properly washed and sterilized its safe
for usage which safes cost compared with other options like tampons and pads.

Furthermore it is environment friendly due to the fact that it is not disposable,it is indeed relevant to think
about the impacts our period have on the environment.Most pads contain polyethylene plastic, which is
harmful to the environment because plastic waste ends up in landfills,and affects the rivers,beaches and
ocean. Most tampons contain chemicals such as rayon,chlorine and dioxin.These chemicals get soaked
by the earth and are released as pollution into the groundwater and air. Using an Eco-friendly menstrual
products means the user won’t contribute to environmental pollution of land.rivers,ocean among others.

Menstrual cups are also safe to use. There is no health risk attached to its use, once used as
directed.Toxic Shock Syndrome a fatal bacterial illness is often attached to the use of tampon by
scientist. TSS caused by menstrual cups use appears to be very rare to virtually non existent. The
reason being that menstrual cups does not absorb and does not irritate the vaginal.

Having said all this, menstrual cup is more expensive than other menstrual materials, hence adolescent
and most women might not be able to afford it’s initial cost. There is however an argument that, over
time, the cost of a menstrual cup, may work out cheap than the cost of disposable sanitary hygiene
products.