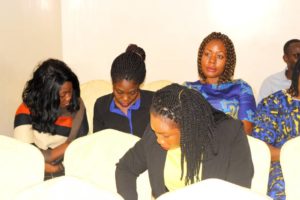 Representatives of various organizations at the meeting

The meeting, started at about some minutes before twelve pm with the recitation of the national anthem,and a brief discussion of what Hubcity innovative centre stands for.

The At the meeting, it was emphasized that the organization works with people who resides in an informal settlement, thereby the organization assists these people by educating them, initiating empowerment programs among others. It is however believed that they are a major source of revenue due to their involvement in large scale agriculture which has tremendous contribution to the economy; therefore, the government can’t do without them. Yet, they are not carried along in the decision making process.

At the meeting, it was discussed that the fundamental problems of Mabushi community are low infrastructures, weak institutional arrangement, open defecation among others. It was stated that in the entire community, there’s no household toilet except for public ones, which are in terribly bad condition, owned by some of the community leaders. Unfortunately,it’s easier to use by the men due the method of construction. Also as a result of the safety related issues revolving the use of open latrines by women (e.g. fear of infection, fear of harassment).This made open defecation an undesirable option for the women.

According to Bassy “sanitation cannot be gambled because when sickness arises, you spend more than the amount you ought to spend maintaining sanitation and proper hygiene”. One of the community leaders pleaded on the federal government to help build toilet, or optionally build a commercial inclined privy. Emphasizing they’re strongly ready for commitment.

In response to the plead on the federal government; a representative of the Federal ministry of environment, Mrs. Ajayi asserted that it is not a prerogative of federal government to build household toilet but only public ones.

Therefore, they were encouraged to improve their maintenance culture because it is believed that building a toilet is not the basic problem, but maintaining it. The community was also advised to stop channeling their toilet wastes to the stream or river, as t is harmful to their health.

On a final note, a power point presentation on modern innovative toilet was made. The toilet building is a mobile screwed toilet that could be detached and move to another location. It is powered by a solar energy. When the skeptic tank is full it could be possessed as manure which would be sold to the farmers for use. This innovation was recommended for the community people. It was announced that subsequent meetings will be communicated.